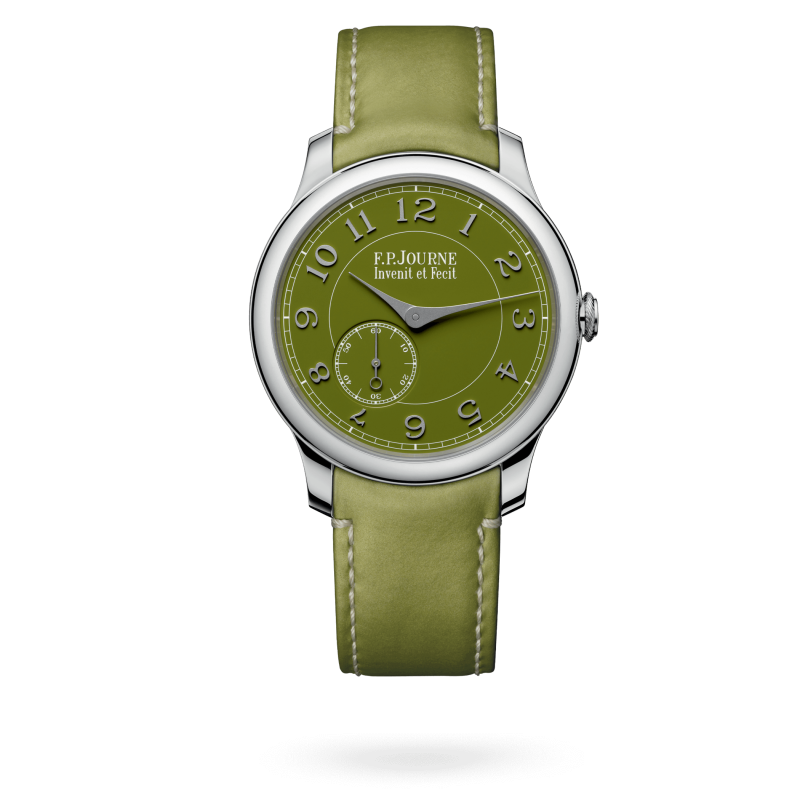 F.P.Journe celebrated the opening of its first Boutique in Dubai on 30 October 2019 at the prestigious Dubai Mall, in partnership with Ahmed Seddiqi & Sons. It is the brand’s 10th Boutique, following openings in Tokyo, Hong Kong, Geneva, Paris, New York, Miami, Los Angeles, Beirut and Kiev.

F.P.Journe finally introduces the Limited Series of 99 pieces celebrating the opening of its Dubai Boutique with 40 mm Platinum case and green dial. François-Paul Journe has specifically chosen a green color, symbolic in the Middle East of chance, fortune and fertility.

THE CHRONOMÈTRE SOUVERAIN IS A PRECISION CHRONOMETER THAT WAS INSPIRED BY THE MARINE CHRONOMETERS OF THE EARLY 19TH CENTURY. CONSTRUCTED IN THE PUREST CHRONOMETRIC TRADITION, IT HAS AN EXTRAFLAT MOVEMENT THAT IS 3.75 MM THICK; ITS BASE PLATE AND BRIDGES ARE IN 18K ROSE GOLD. THE TWO BARRELS OF THE HOMOGENEOUS MOVEMENT DELIVER A HIGHLY LINEAR FORCE TO THE ESCAPEMENT FOR OVER FIFTY-SIX HOURS. THE ESCAPEMENT BEATS AT A FREQUENCY OF 21,600 VIBRATIONS PER HOUR.

WITH ITS TRADITIONAL YET UNEXPECTED LOOK, THE CHRONOMÈTRE SOUVERAIN HAS BECOME A MODEL OF REFERENCE. IT IS PARTICULARLY SLIM, AT ONLY 8.60 MM THICK. THE SMALL SECONDS SUBDIAL IS AT LEFT AT 7:30. OWNING A CHRONOMÈTRE SOUVERAIN IS THE ULTIMATE LUXURY FOR THOSE WHO ARE MINDFUL OF THE TIME STILL TO COME, AND INTEND TO ENJOY IT THOROUGHLY.