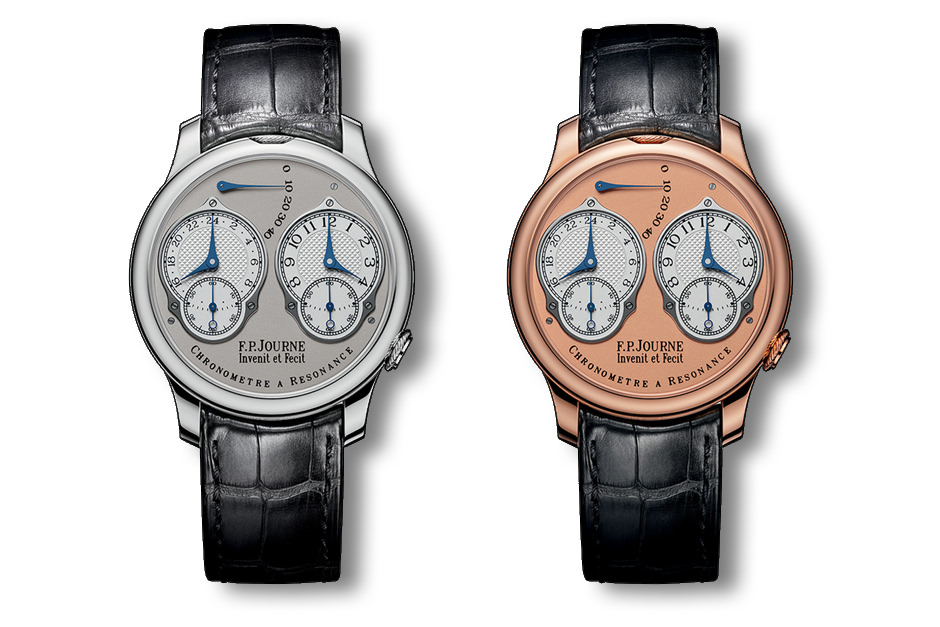 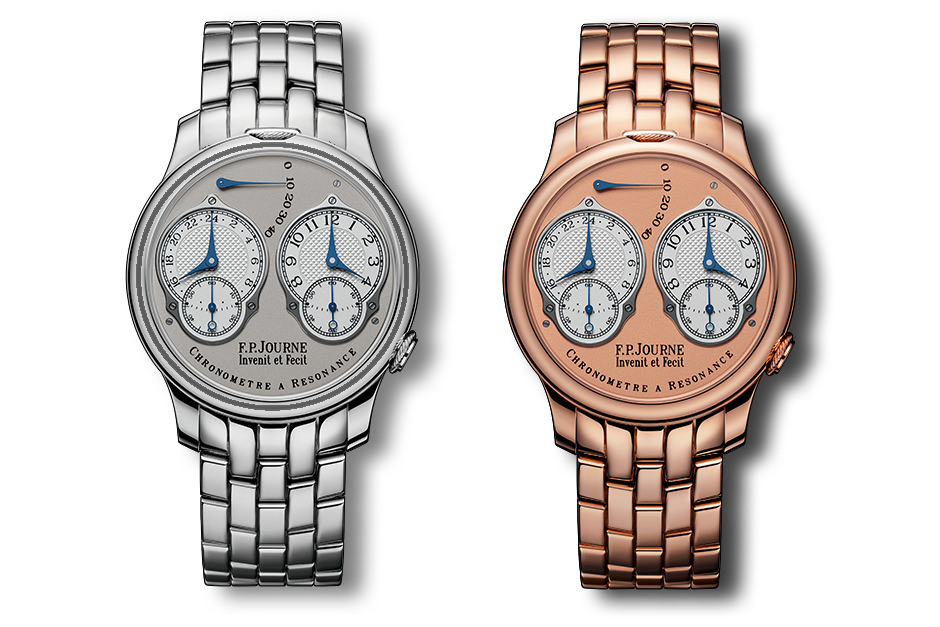 For the 20th Anniversary of the Chronomètre à Résonance, F.P.Journe proposes a version with a special dial that will be produced only during the year 2019. The hour dial at 3h maintain an analog 12 hour indication while the dial at 9h features for this edition an analog 24 hour indication.

The subtle 18K rose Gold mechanism with its two perfectly synchronized beating mechanical hearts for an unequaled precision in a wristwatch are visible through a sapphire crystal case-back. The 2019 edition of the Chronomètre à Résonance is available in two versions: one with a Platinum case and white Gold dial, the other entirely in 18K 6N Gold. The two dials in Silver guilloche Clous de Paris indicating the hours and minutes can also be set on two different time zones.

The Chronomètre à Résonance is imbued with a profoundly poetic depth, and remains, 18 years later, the most precise mechanical watch in contemporary watch making.

The resonance phenomenon is two frequencies which harmonize

Any animate body transmits a vibration to its environment. When another body picks up this vibration, it absorbs its energy and begins to vibrate at the same frequency. The first is called the “exciter” and the second the “resonator”. This physical phenomenon known as “resonance” is an integral part of our daily life and yet we hardly even notice it.

When we are looking for a program on the radio, it crackles until the chosen wavelengths meet those of the transmitter: only then do they harmonize to begin resonating together.

Resonance concerns all fields including those related to mechanical engineering, music and human beings, as confirmed by musician Keith Jarrett (in our first catalogue): “This is particularly obvious in music, since lutes and sitars, for example, have strings whose only reason for existence is to vibrate by resonance; the musician never touches them, despite their proximity to the strings that are plucked.

Next articles
Centigraphe Anniversaire
Limited Series for the 10th Anniversary of the Paris F.P.Journe Boutique
F.P.JOURNE - INVENIT ET FECIT – BY JEAN-PIERRE GROSZ
The fascinating book that tells the legendary story of François-Paul Journe has finally been released. Over 360 pages, the author relates his childhood as an enfant terrible in Marseille; his wild adolescent friendships, his joys and indiscretions; his hopes and doubts for his future; and, finally, the revelation of the world of watchmaking – a universe that was to become his vocation and would open up wonderful new horizons.
Unique F.P.Journe timepiece made for the Prince Albert II of Monaco Foundation and sold in Singapore for the extraordinary amount of SG$ 400’000
Singapore, November 9th, 2018 - F.P.Journe realized with Michael Tay a unique piece of his Chronographe Rattrapante given for the 10th Anniversary of the Prince Albert II of Monaco Foundation and sold during the Singapore Charity Ball auction under the patronage of his H.S.H Prince Albert II of Monaco.
fermer