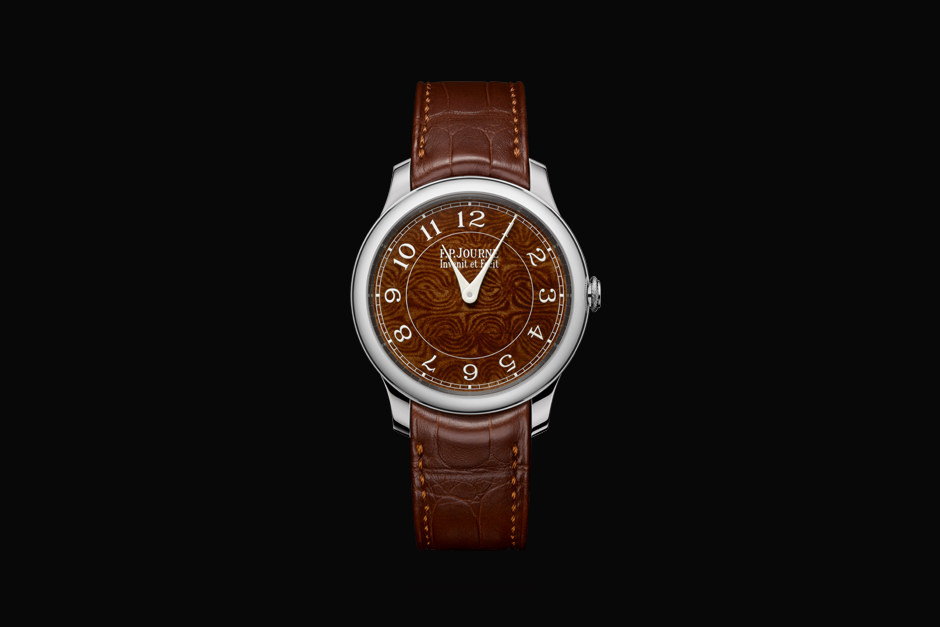 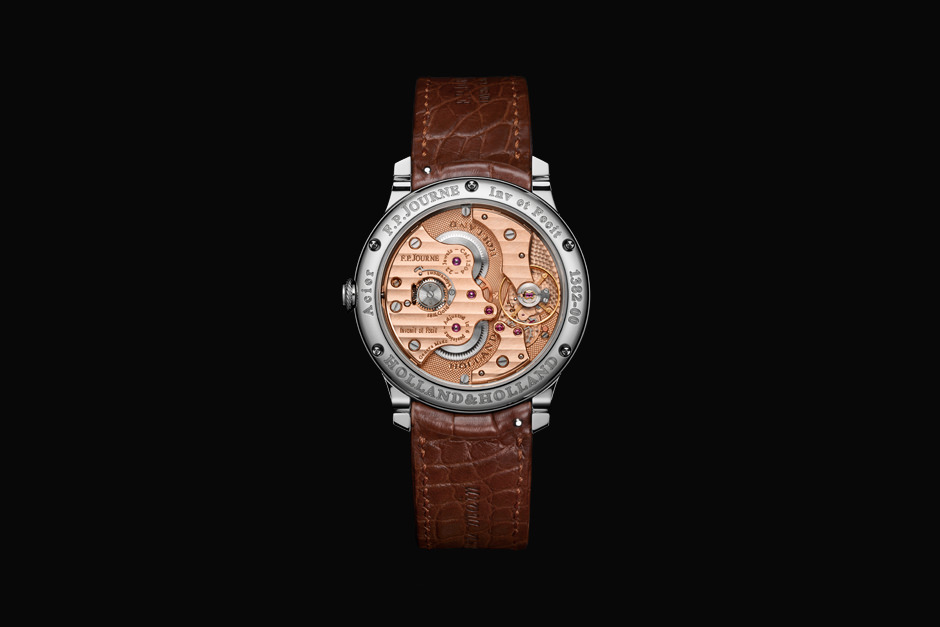 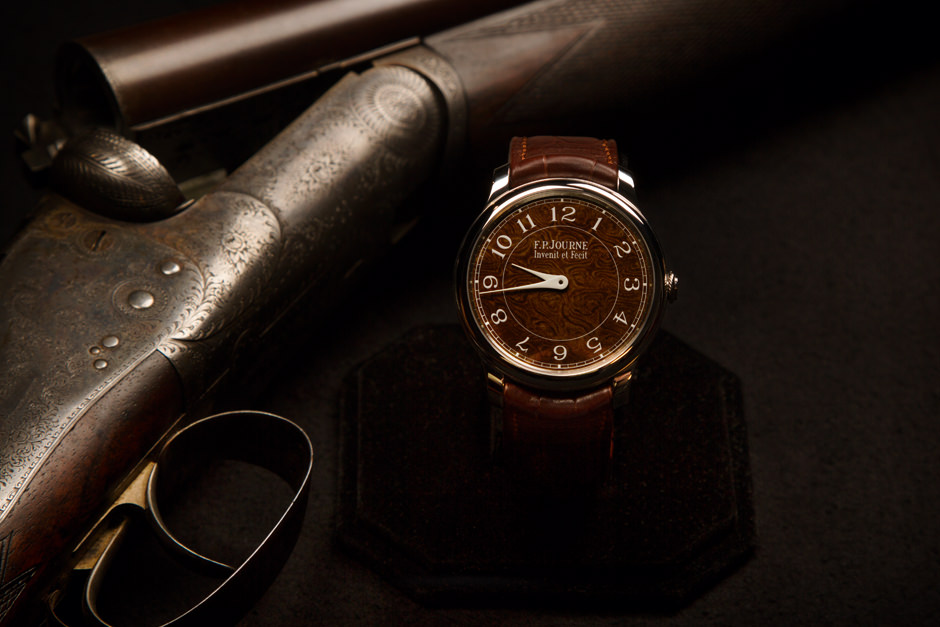 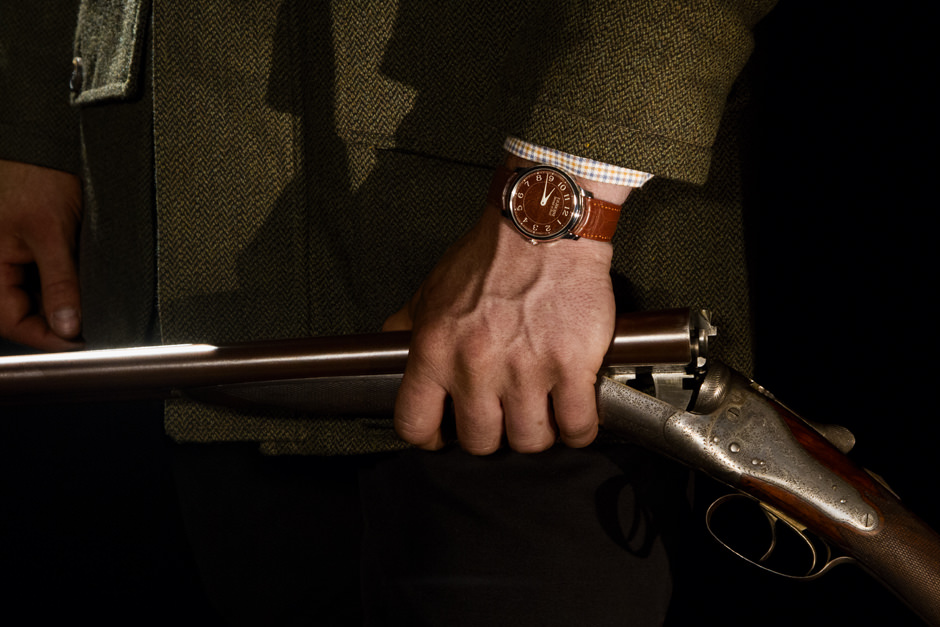 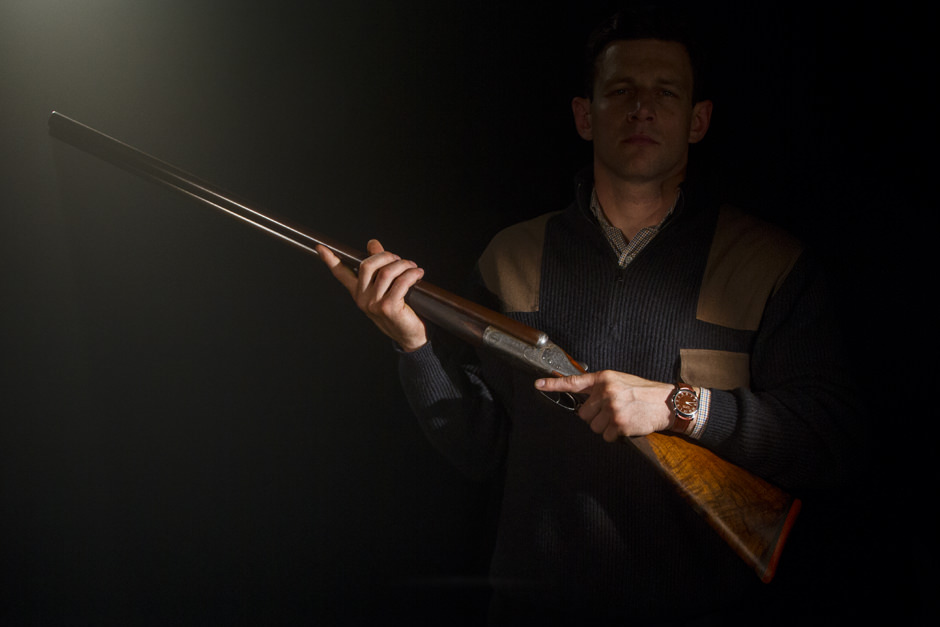 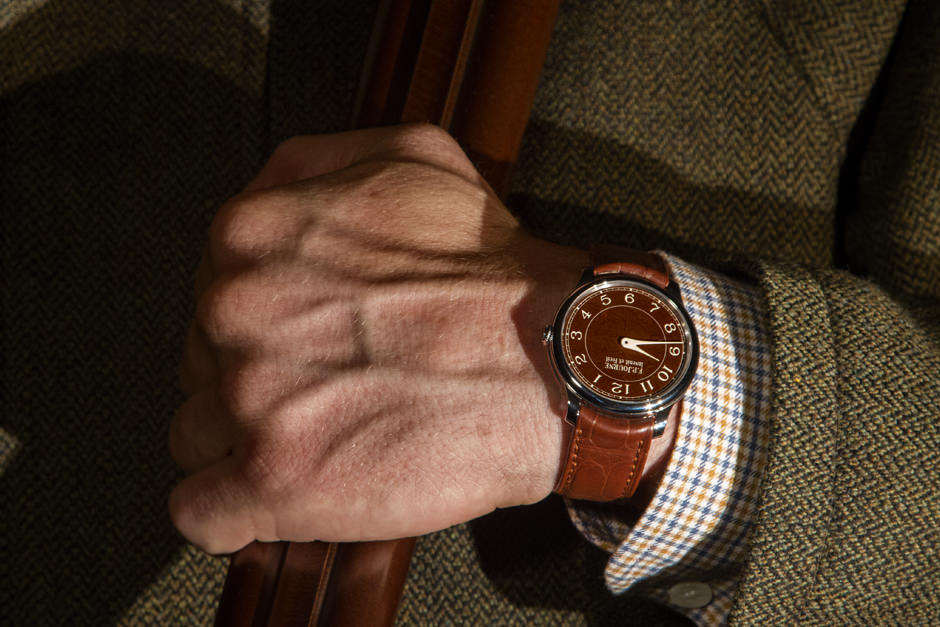 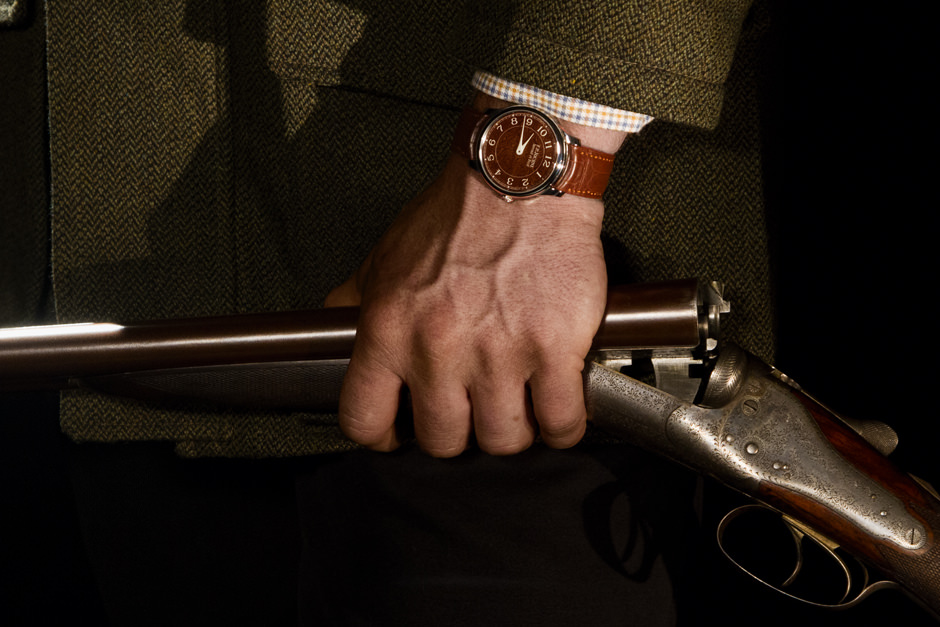 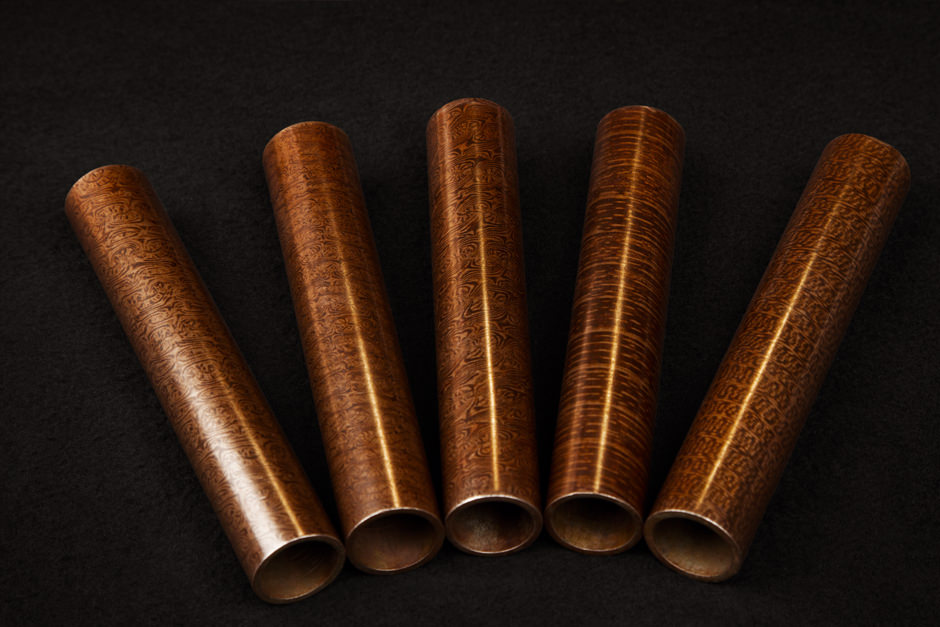 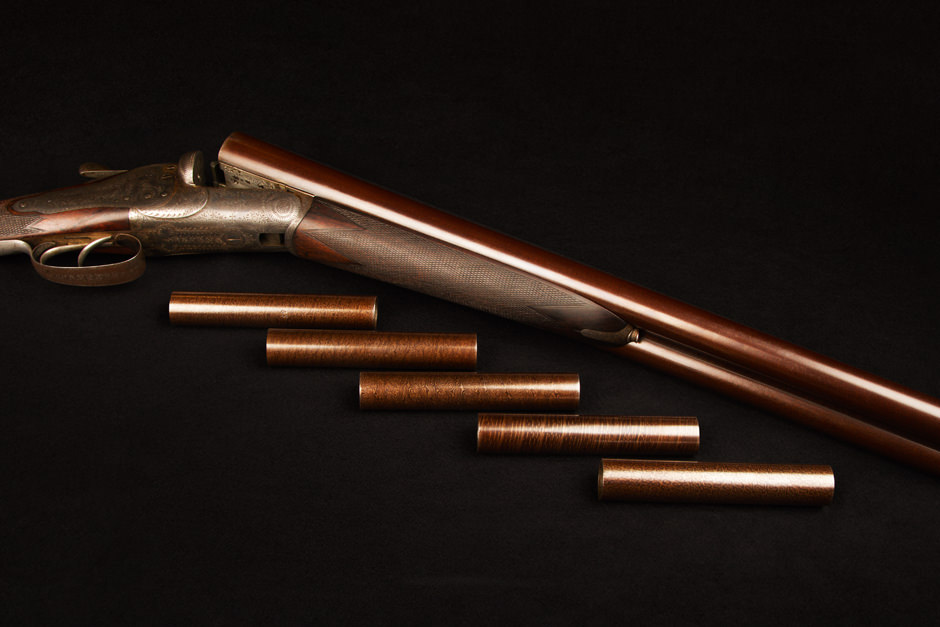 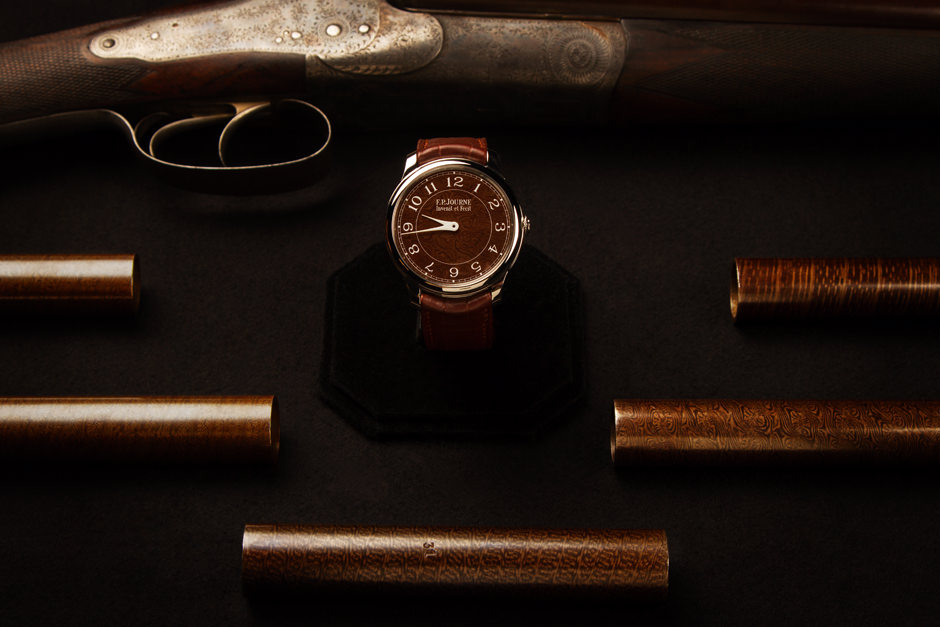 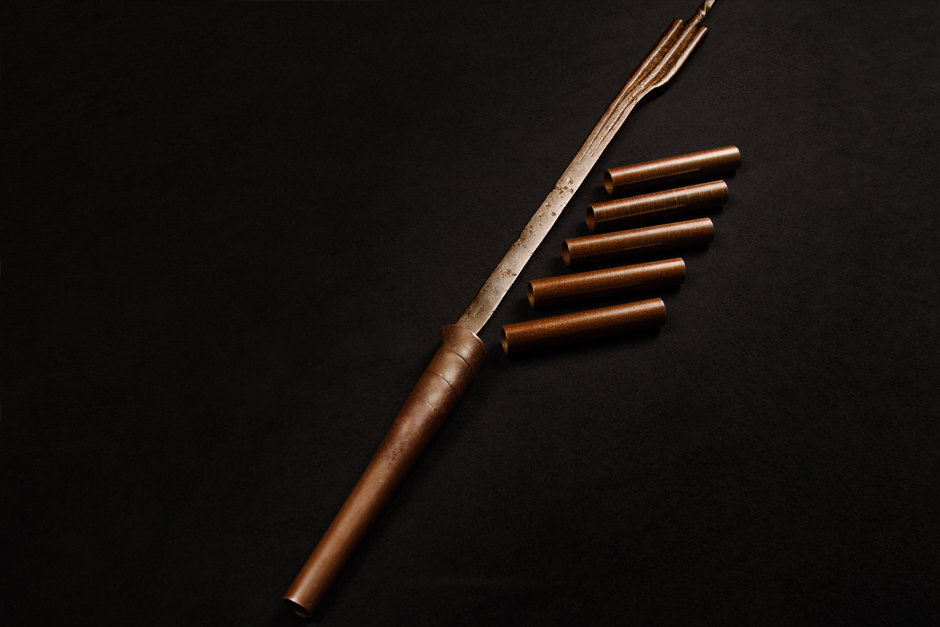 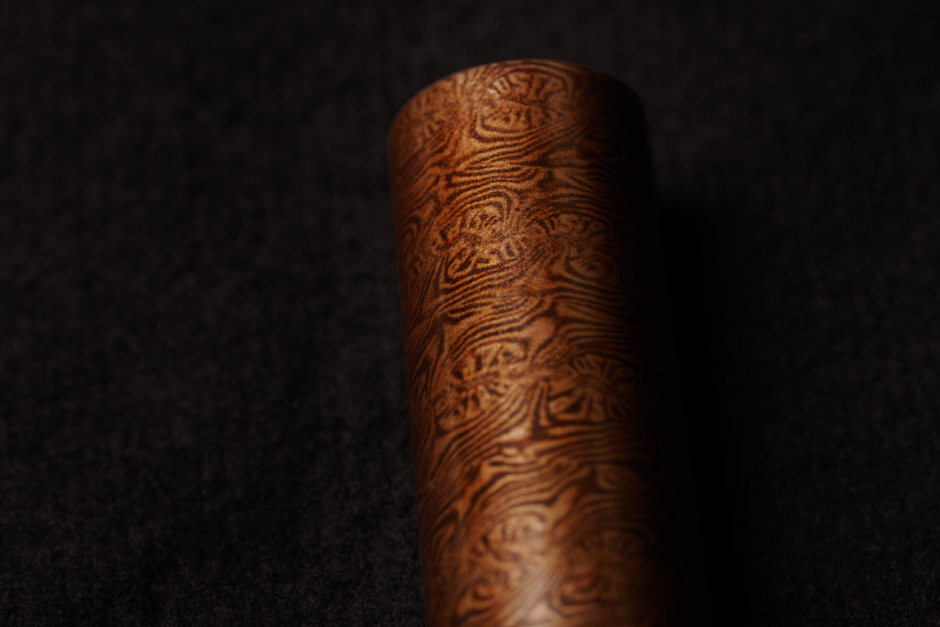 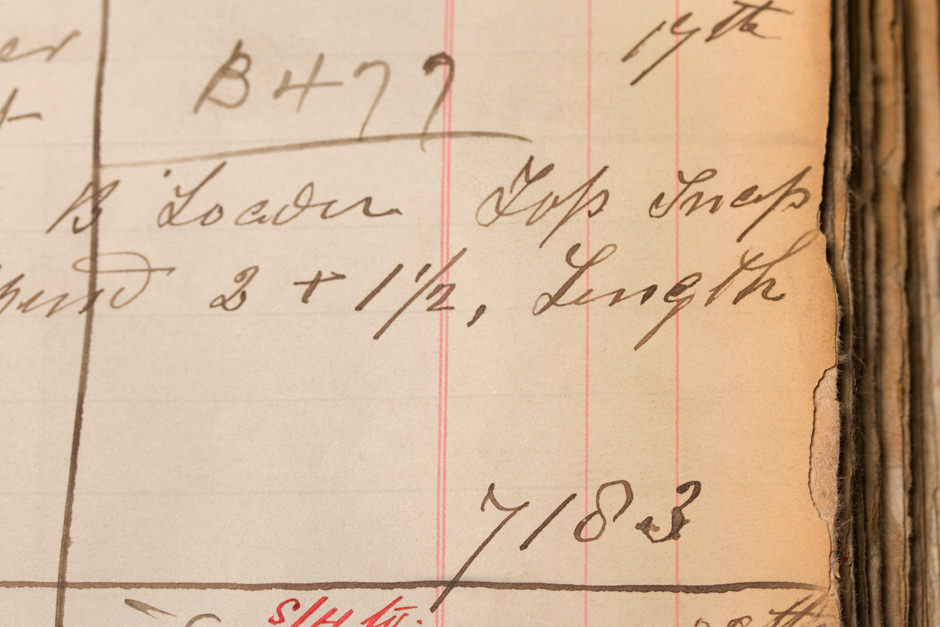 F.P.Journe and Holland & Holland are two high-end craft brands.
Upon meeting, they decided to work together on a unique creation that would illustrate the best of their respective know-how.

François-Paul Journe is always in search of the exceptional, the unique and the innovative. He immediately saw the possibility of including Damascus steel in a unique watch series with a powerful story with deep references to ancient tradition.

For their part, Holland & Holland was attracted by the idea of allowing two of their museum barrels of over hundred years old to be used to make magnificent haute horology F.P. Journe timepieces. The two barrels were registered by hand in the company’s books. Barrel No. 1382, dating to 1868, yielded 38 dials, while barrel No. 7183, dating to 1882, produced 28 dials.

To discover the story of how this exceptional partnership came to be and what makes the F.P.Journe Chronomètre Holland & Holland a singular creation, this page will be updated with additional content.

F.P. Journe and Holland & Holland are two manufactures that share common values: excellence, exquisite craftsmanship, as well as a shared love for beauty.

Both have produced outstanding art objects for decades, each in their own field. Their highly specialized craftsmen have spent endless hours making and shaping each component. These skilled professional polishers, decorators and engravers, fine wood and precious metal specialists, lacquerers, precision mechanics and watchmakers all perform their tasks tirelessly and meticulously until they attain perfection.

The conception of an F.P. Journe watch can take a minimum of three years; the making of a bespoke Holland & Holland gun can take up to two years, during which time the client can choose each part of his new gun.

Independent contemporary master watchmaker, François-Paul Journe, has been conceiving and manufacturing haute horology timepieces for forty years. His knowledge of history and expertise has led him to show a timeless consistency in his research and innovative powers.

F.P. Journe’s exceptional haute horological creations span decades. They have an outstanding pedigree and each series features unusual functions and technical highlights. The Chronomètre à Résonance, for instance, has two mechanical hearts; the Tourbillon Souverain features a remontoire and dead-beat second. And there is the ultra-slim Répétition Souveraine, or the stunning Sonnerie Souveraine. These pinnacles in the art of watchmaking have earned F.P. Journe the world’s most prestigious industry awards.

Holland & Holland have been leading British gun-makers for over a century. Founder Harris Holland was a fine competition pigeon shot leading to the establishment of “H. Holland” as a gunmaker in the 1950’s. Shortly after, Henry William Holland joined the company as an apprentice. He would become an inventive genius and gifted businessman who drove his uncle’s firm forward.

Over the decades, Holland & Holland has always been able to maintain its top-ranking position in the industry by focusing on quality and excellent craftsmanship. At their Bruton Street premises, they introduced their “Products of Excellence” concept, which set a new standard for fine presentation-grade guns and rifles, and they unveiled a new calibre, the.700 Nitro Express.

The idea was to use bars of two or more different types of steel, or iron steel, one having less carbon content, and forge them together into a single bar. This was done by heating, twisting and hammering as needed, and then folding the bar, hammering and forging it again. The process was repeated a few more times. The result was a bar with layers of steel of different types producing the wavy lines and patterns visible due to the difference in chemical composition between the different bars used.

The challenge in producing the dial of this limited series was the process of cutting the dials out of the round barrels. This involved several operations that took place in London and in Geneva, at F.P. Journe’s own dial makers, “Les Cadraniers de Genève”.

What is particularly striking about this Limited Series of timepieces is that it is based on a lost know-how. It's a story that begins and ends. It's like an instant photograph.

The calibre 1304 from the Chronomètre Bleu was used, but with the small second mechanism removed. This allowed to further enhance the texture and pattern of the dial.

François-Paul Journe decided to use a 39-millimeter steel case, a reference to the steel used for the gun barrels. The choice of this diameter was made to underline the uniqueness of the timepiece, since this size had never been used before. Only 38- and 40-millimeter cases were used at the manufacture.

The choice of calibre 1304 is also meaningful. This caliber is a precision chronometer powered by two parallel spring barrels.

The technology was used in marine chronometers at about the time these guns were being manufactured.