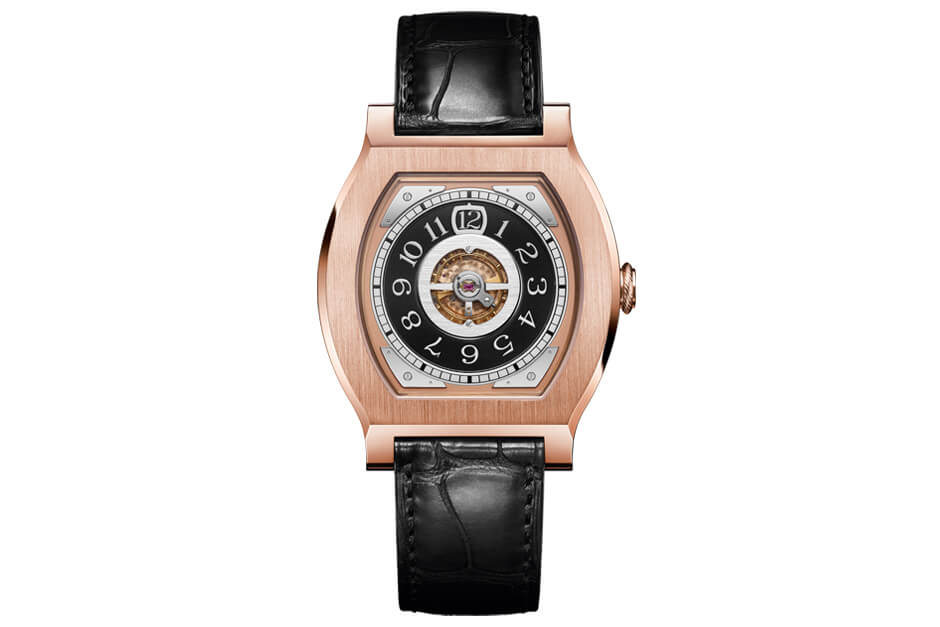 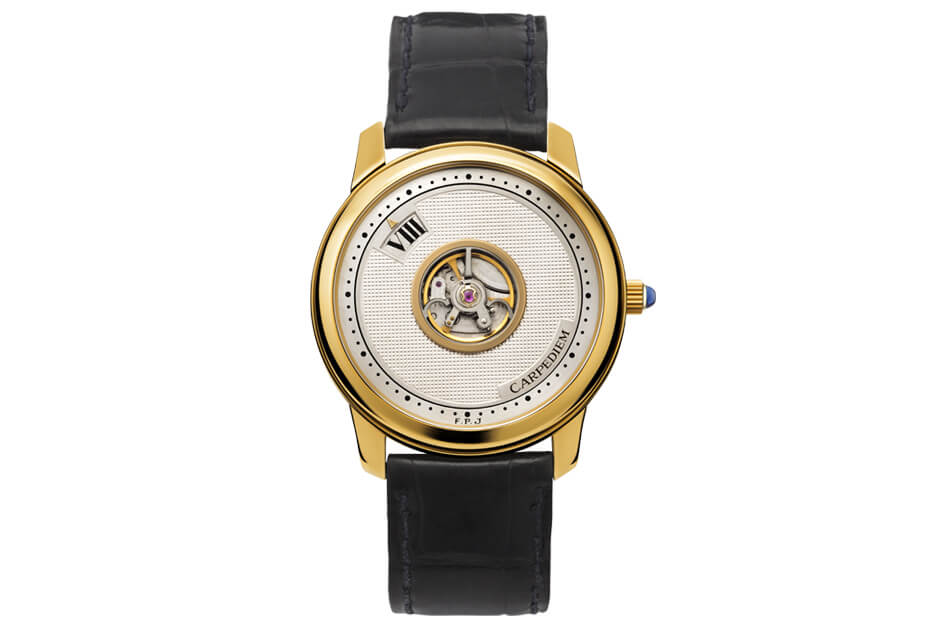 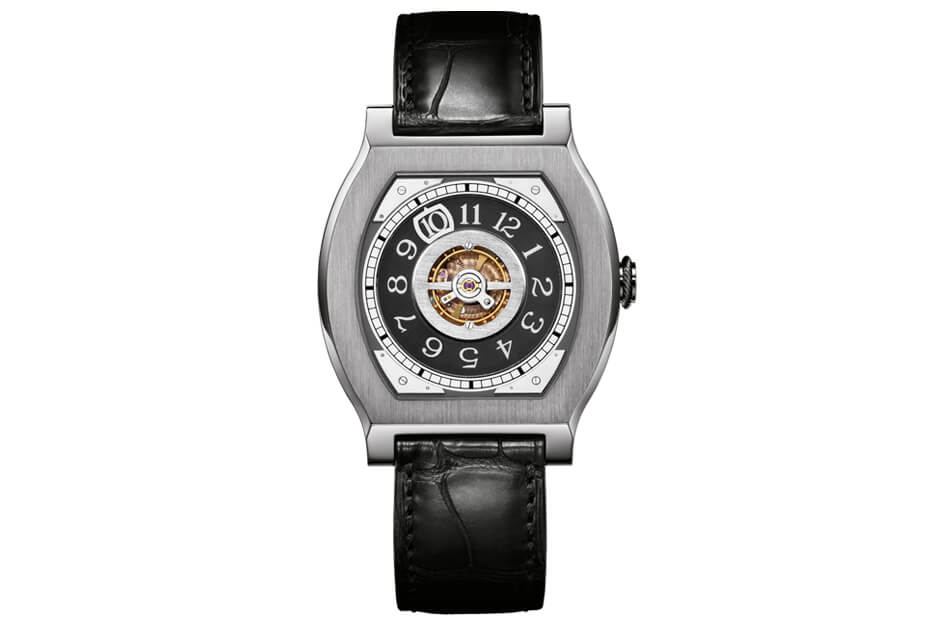 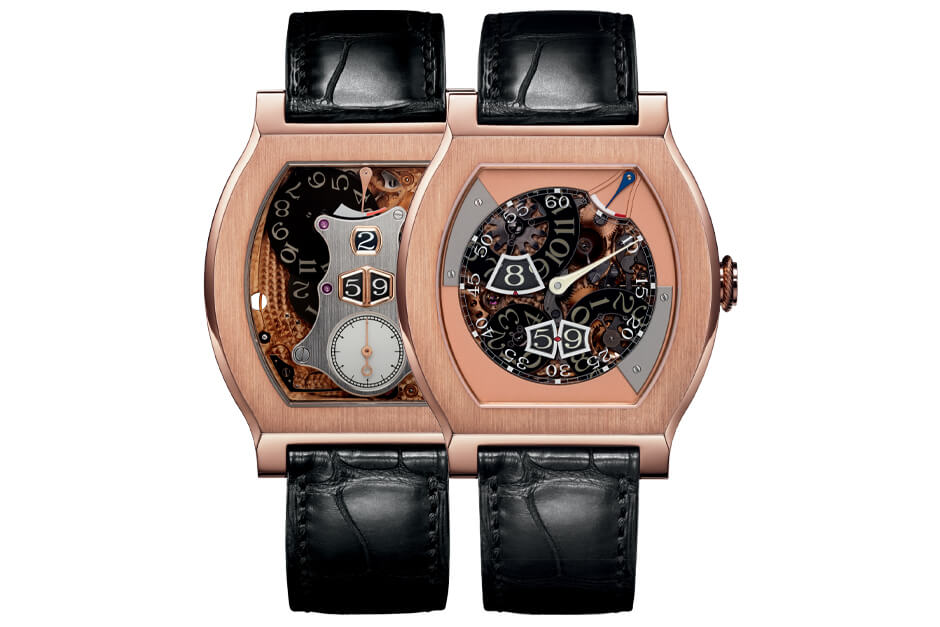 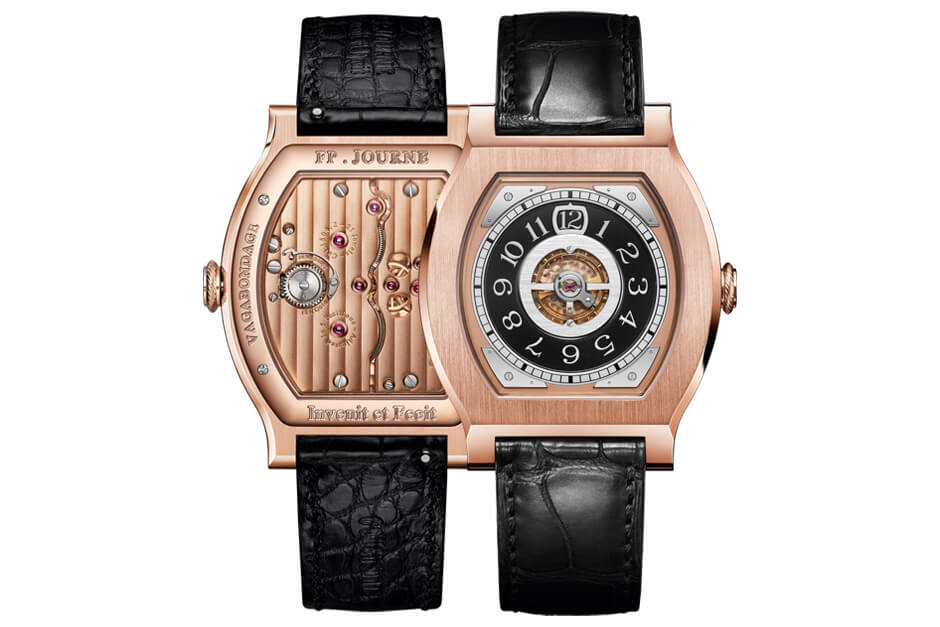 Final chapter of a trilogy started 18 years ago.

In 1997, François-Paul Journe created for a friend a model equipped with a unique automatic movement housed in a round yellow Gold case, named CARPEDIEM. This piece features a dial with a wandering jump hour display around a central exposed balance wheel. Later, François-Paul Journe developed a wandering hours wristwatch with a hand-wound movement, almost mimicking the dial of the CARPEDIEM, though redesigned to fit into a Flat Tortue® case. However, busy with other projects, he decided to leave this model at the prototype stage.

In 2003, François-Paul Journe was contacted by Antiquorum, which was organizing a charity sale for its 30th an- niversary for the benefit of the ICM Foundation. They were looking for a «unique piece», within a limited timeframe of six months. Seeing it impossible to come up with something new in such a short time, he decided to rework the Vagabondage prototype. In the end, it is not just one, but three unique «Vagabondage» pieces that were presented: one with a rose Gold case, one in yellow Gold, and one in white Gold, all with Brass movements. For aesthetic reasons, the brand name is completely absent from the dial. The auction having been a real success, François-Paul Journe received many requests to include the model in his production, and to make it available to a wider public of collectors; which he agreed to do, but in very limited production, given the aesthetic dissimilarity with his other creations at the time.

Vagabondage I is the first timepiece edited in a limited production of 69 Platinum cases with rose Gold movement. It features digital jumping hours in a wandering aperture which position indicates the minutes. Just as the trilogy offered at auction in 2003, the dial is free of any inscriptions. This particularity will be kept, as well as the use of a hand-wound movement.

In keeping with the stylistic trademark of its predecessor, the Vagabondage II was cased in a Flat Tortue® case in Platinum, but with a digital hours and digital minutes time display. Given its growing reputation and community, François-Paul Journe decided to produce 68 pieces in 6N Gold, in addition to the 69 Platinum cases. To the series collectors, he offers each owner of a Vagabondage I the opportunity to acquire the same serial number for the Vagabondage II.

In 2017, the last series appears, coupled with a world first: The Vagabondage III features a digital hours and digital seconds dis- play. This function has never been developed in watchmaking due to its demanding complexity. The Vagabondage III is limited to 68 pieces in 6N gold, in addition to 69 in Platinum. Once again, François-Paul Journe offers the first allocations to the owners of the Vagabondage II bearing the same number.

To complete the Gold trilogy, F.P.Journe presents this last iteration, which is however not an exact copy of the Vagabondage I Platinum introduced in 2004. Pointing to a gap of nearly 18 years, the Vagabondage I Gold features an updated movement, reference 1504.2, still manually wound, and a 45.2 x 37.5 mm case. As François-Paul Journe says: “The first Vagabondage can be considered as a prototype at the time. We now have the experience to make a better, more reliable caliber and so the movement is a new and more updated movement compared to the first attempt. The first was Calibre 1504 and this new one is 1504.2.”

As with the previous Vagabondages, this model will be on application, with priority given to to collectors with matching serial numbers of the Vagabondages II and III in Gold.

Next articles
PRIX SOLO ARTGENÈVE - F.P.JOURNE 2022
Geneva, March 3rd, 2022 – The Prix Solo artgenève - F.P.Journe 2022 was awarded to the Urs Meile Gallery, for the Solo Show of Rebekka Steiger, with a special mention to the Pace Gallery for the Solo Show of Lucas Samaras.
fermer