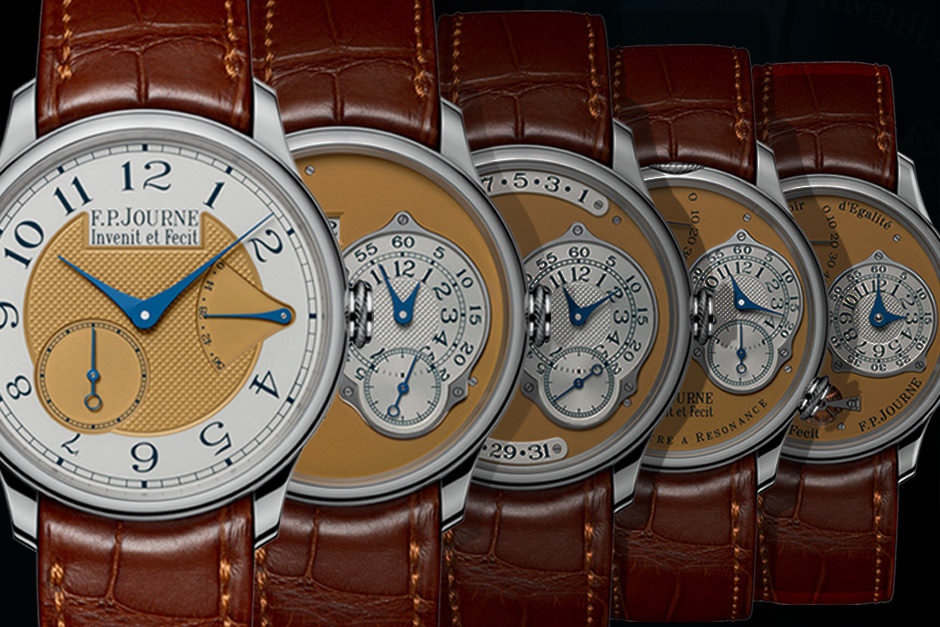 In the 1980’s, François-Paul Journe constructed custom-made pocket watches for very discerning collectors. In 1991, he presented his first wristwatch at BaselWorld with a Platinum case of 38 mm in diameter. This was unheard-of at the time, when watches ranged between 33 and 36 mm maximum for the largest ones.

The main reason the watch was so large was that it was the first Tourbillon wristwatch with Remontoir d’Egalité ever created, and the complex mechanism took up a certain amount of space.

In 2001, F.P. Journe presented a new Tourbillon in a limited series of 99 pieces. This was the start of the Ruthenium Collection: a collection of 5 models, all with a case that was 40 mm in diameter. From then on, each watch could be offered either in 38 or 40 mm.

The Grande Sonnerie, presented in 2006, was 42 mm in diameter. After that, collectors began requesting 42 mm watches. But in order to maintain harmonious proportions, the dimension of the dial had to be completely redesigned as well as the complication that would animate the watch.

Thus, the Chronomètre Optimum, which is a compendium of chronometric savoir-faire, naturally required more space. A 38 mm case is too small; 40 or 42 mm sizes would suit perfectly this watch’s incredible mechanism.

Afterwards, the Quantième Perpétuel with instant jump and the Octa Lune were also adapted to 40 and 42 mm cases to make their indications more legible. Now, wishing to celebrate the end of the historic 38 mm case after 25 years of existence, F.P. Journe has created 38 exclusive collector’s sets containing 5 emblematic and historic watches in 38 mm.

It is extremely rare for luxury watches to be cased in Steel. There are very few such watches, and they reach much higher prices at auction than the same models in precious metals. This set is intended for true collectors, those who know what is rare. The combination of 18K rose Gold movements with 38 mm Steel cases makes this set the rarest of all F.P. Journe’s collections.

The Tourbillon Souverain (made from 1999 to 2003) was never made with a Gold movement, which makes it doubly exclusive.

The Chronomètre à Résonance in its original configuration, (made from 2000 to 2009) with 2 symmetrical analog display dials.

The Octa Automatique (made from 2002 to 2014) emblematic timepiece, is the first automatic watch made by F.P. Journe.

The Octa Calendrier Annuel, (made from 2003 to 2014) the company’s automatic bestseller since its creation.

The Chronomètre Souverain (made since 2005) had to be included in the set, due to its aesthetic purity and its magnificent mechanism; pure minimalism.

This is the last time these watches will be available new!

Then you will have to wait for them to appear at auction!

F.P.Journe Golf Cup, Geneva
Vandoeuvres, 13 June 2015
Launch of the «élégante» in the USA, New York
Wednesday June 3rd, 2015 – F.P. Journe was launching in American Première its first collection for Ladies the “élégante” in the USA at the New York Palace Jewel Suite
fermer