Skip to main content Skip to footer Skip to search
Filter
by category
Events articles
2017
CELEBRATION OF THE 10TH ANNIVERSARY OF THE GENEVA F.P.JOURNE BOUTIQUE WITH A LIMITED SERIES OF 10 PIECES, THE CENTIGRAPHE ANNIVERSAIRE
4 May 2017 – The Anniversary Centigraphe celebrates the 10th Anniversary of each F.P.Journe Boutique 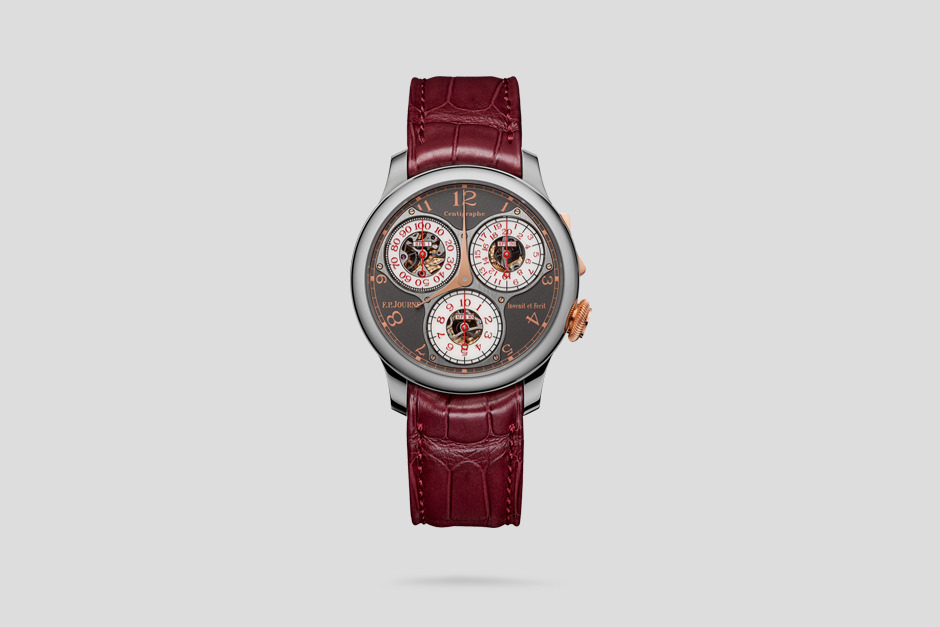 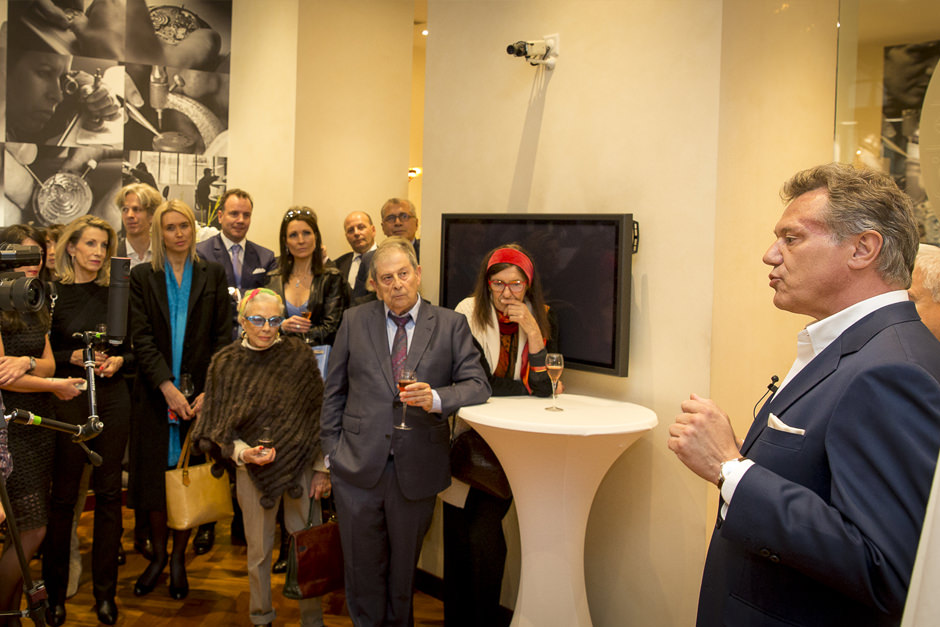 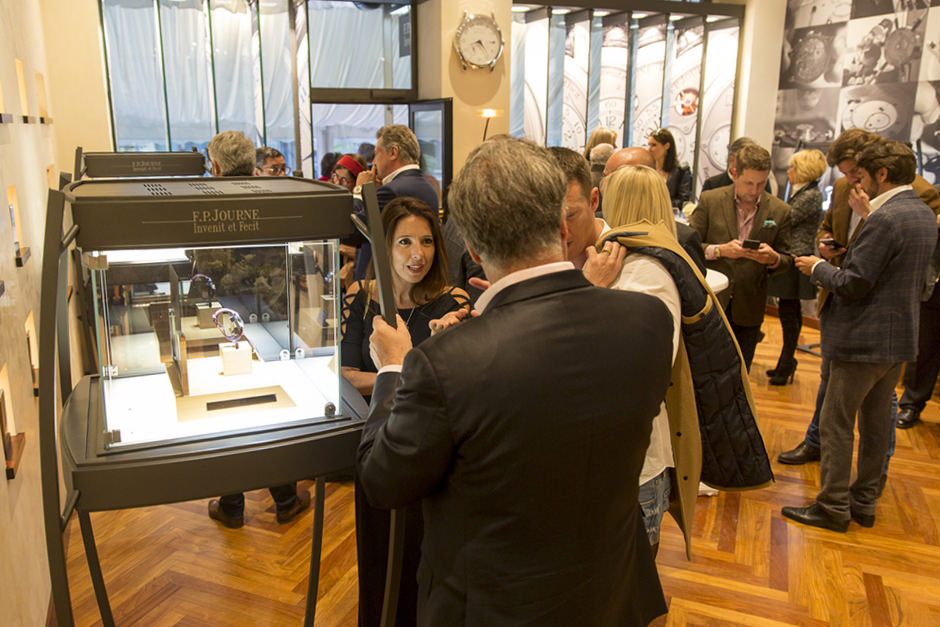 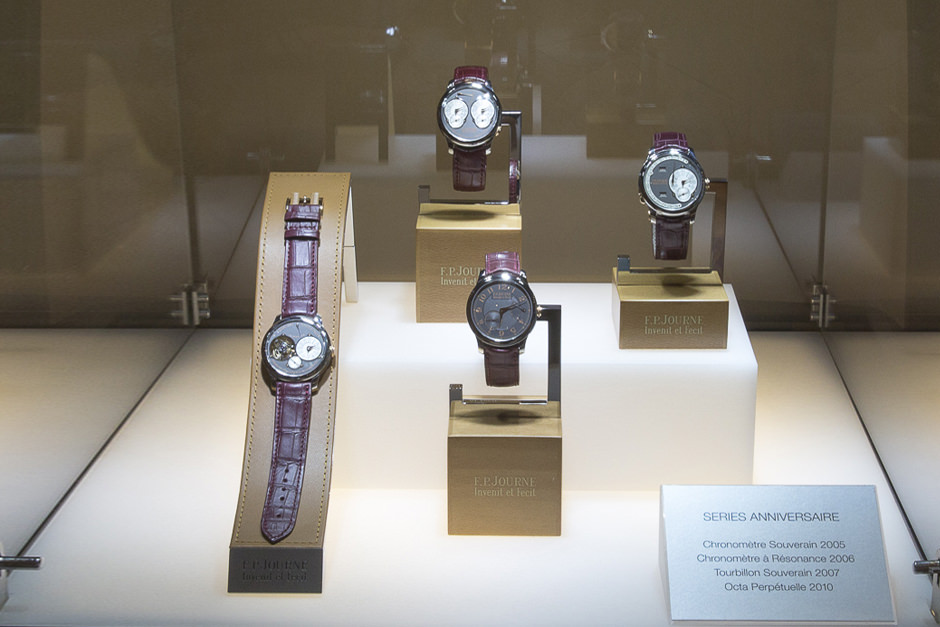 Centigraphe Anniversaire
Limited Series for the 10th Anniversary of the Geneva F.P.Journe Boutique

This exclusive edition is made in a perfect harmony of colours: a 40mm polished Titanium case, a Ruthenium dial with sapphire registers, an 18K Gold crown and rocker, the emblematic mechanical movement with manual winding in 18K rose Gold and the burgundy alligator strap.

The Centigraphe is a spectacular mechanical chronograph that indicates elapsed times from a 100th of a second to 10 minutes, visible on 3 dials, each with a time scale in red.
On the left, the 100th of a second hand revolves around the dial in one second. The hand on the right revolves once every 20 seconds on a time scale divided into seconds. The hand at 6 o’clock makes a tour in 10 minutes.
The chronograph is started, stopped and zeroed by a rocker located at 2 o’clock in the case band. This ergonomic design, perfectly fitted to the wristwatch, is patented.

A second patent was granted for the mechanism’s ingenious configuration, which effectively isolates the chronograph from the timekeeping function. This means the balance amplitude is unaffected when the chronograph is running.

Along with Professor Gérard Saillant, Luc Besson, Jean Réno, Jean Todt, Michelle Yeoh and Michael Schumacher, amongst others, François-Paul Journe has committed to donating 30% of the profits from the sale of each Centigraphe to the ICM, with no time limit.
(www.icm-institute.org)

The Centigraphe Souverain was awarded the « l’Aiguille d’Or » (the Golden Hand ) at the Grand Prix d’Horlogerie of Geneva in 2008. It was also elected Watch of the Year on timezone.com in 2009.

The F.P.Journe Boutiques Anniversaries
The next Boutiques celebrating their Anniversaries will be Paris in 2018; New York in 2019; Bal Harbour in 2022; Los Angeles in 2023 and last but not least Beirut in 2024.

Next articles
THE PRIX OFF ARTMONTE-CARLO - F.P.JOURNE, MONACO
April 2017 – 2nd edition of the contemporary Art Salon artmonte-carlo
Opening of the 11th F.P.Journe Boutique in Kiev – Ukraine
February 2017 – On Gorodetskogo Street, in the prestigious district of Arkhitektora
PRIX SOLO ARTGENEVE-F.P.JOURNE, GENEVA
January 2017 - Awarded to the Sébastien Bertrand Gallery for the solo exhibition by Walter Robinson